The Ac1db1tch3z exploit and "Robert you suck" thingie 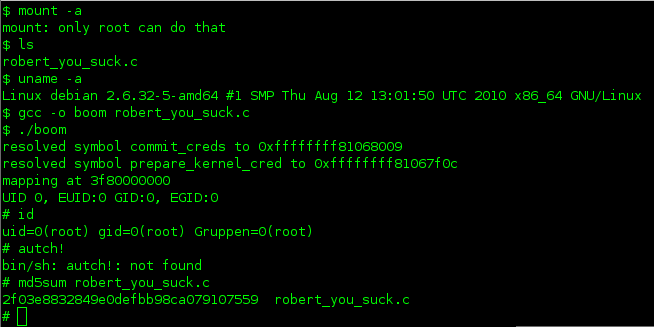 Yepp.. It’s another one. I’ve tested it on my own laptop and voila: BOOM! Anoher local root exploit is out there. In fact this exploit shouldn’t have been released at all.. An earlier incident was reported in 2007.So why in God’s sake is this malfunction still in the wild? We don’t know it. I’d call it stupidity, if you’re fine with me. L33t hackers like Ac1db1tch3z seem to have antipathy against good security researchers like Ben Hawkes. Nevertheless I was able to find a workaround which will fix the problem. Unfortunately this doesn’t fix the problem at all:

So where is the solution?!  Check this and this.