In this article I’ll have a a closer look at DroidBox which provides a mobile sandbox to look at Android applications. In the previous post I’ve dealt with static code analysis. This time will start running our malicious application and look at the “noise” it generates. That would be:

DroidBox is very easy to use and consists of an own system image and kernel meant to log one applications activities. Using adb logcat DroidBox will look for certain debug messages and collect anything related to the monitored app. However I must say that loged data isn’t always complete. Sometimes you’ll get only a striped version of the data which caused the activity. In that case it’s almost impossible e.g. to have a deep look at the network traffic (especially HTTP). You won’t be able to construct a full request-response-sequence due to missing data. Nevertheless you can use DroidBox to get an overview of malicious activities triggered by the app. For a more technical analysis of the data you’ll need additional tools (more to come in future posts).

First you’ll have to install some requirements DroidBox needs. First make sure you have the system relevant packages installed:

You’ll need those in order to use scipy, matplotlib and numpy along with Droidbox. Now create a virtual environment and install python dependencies:

Now you’ll have to install an Android device virtually in order to analyze the APK. Supposing you have installed the SDK in the previous step now you should have some targets available on your machine. If not (that was my case) then make sure you have a X session running and run android from the console. In my case I’ve fired up vnc and connected to the Kali machine.

This is what I’ve got:

Afterwards make sure you have a X session and run the emulator with your previously created AVD:

Now you should see your emulator booting …

DroidBox will then listen for activities until you kill it by ^C.

Meanwhile I was interacting with the APP and saw that DroidBox was collecting the logs during the interacttions. DroidBox will output its results as a JSON file. I’ve uploaded the results to pastebin.com. Now let’s have some fun and take a look at the results.

Before starting analyzing the output keep in mind that:

[…] all data received/sent, read/written are shown in hexadecimal since the handled data can contain binary data.

First let’s download the data and let python parse it

So we have diffenrent categories of activities we can look at. After analyzing the JSON content I’ve come to following most important activities.

Here you can have a look at the sent data. Again: The POST/GET requests are not fully complete.

Since I was not able to get the full contents of the POST/GET requests (and their equivalent responses), I had to rely on the information found here. Below is a short sequence diagramm describing the general process of the communication. Keep in mind that the sequence only tries to give you a short overview of the data exchange between the process and the webserver. 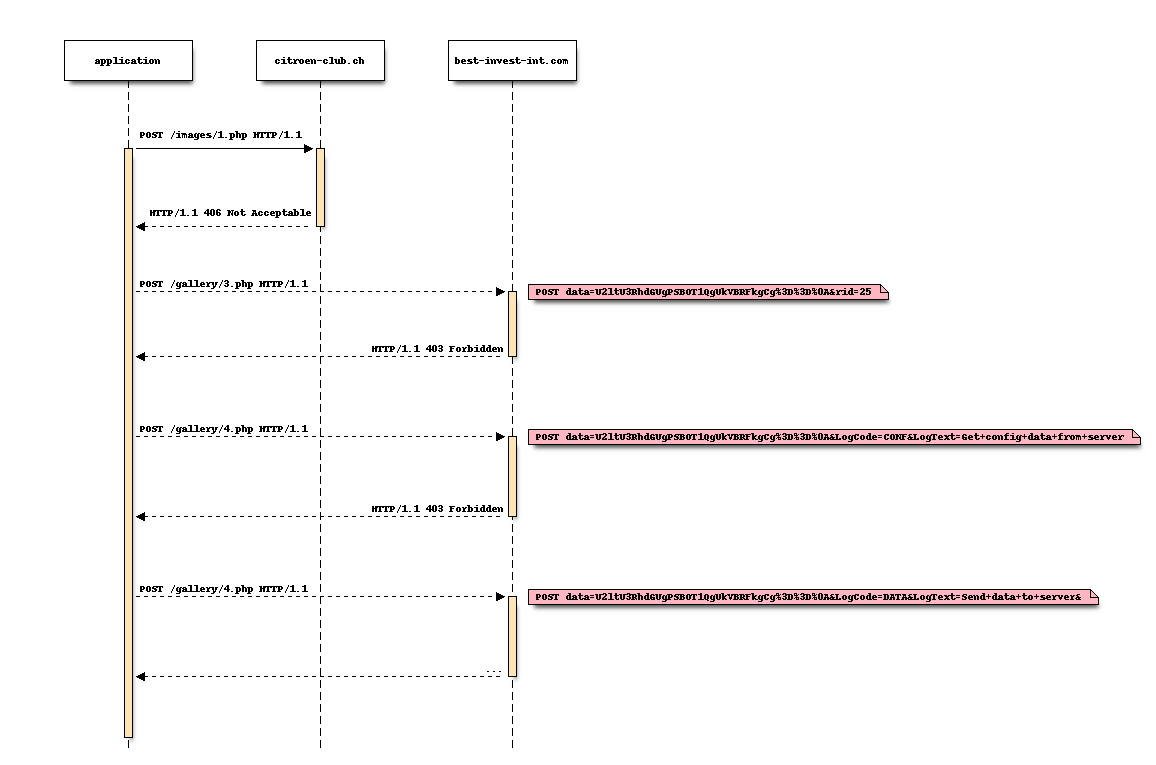 And now a complete request/response pair:

Now let’s have a look in which order the several activities took place. Below you’ll find a table containing the timestamp, operation and category of each specific activity (e.g. file system access, network read/write etc.)

I think DroidBox is a very good tool to deal with Android APKs and analyze their behaviour during run-time. It comes with a working mobile sandbox meant to inspect and monitor an applications activities. However during my analysis I had to rely on previous analysis since the results didn’t contain the full details. Not only the network traffic but also the contents read from files weren’t complete. In order to fully unterstand one malware I need complete details about its behaviour. For example I had following response from the server which is completely useless:

Besides that I was indeed able to see that the application is reading from some file. But the delivered content was once again striped:

I hope the developers will see this as a vital necessity and update as soon as possible. Furthermore I’ll look forward to other mobile sandboxes which have data instrumentation capabilities. Next time I’ll have a deeper look at Androids DDMS.