Continuing my CCNA journey I’d like to address inter VLAN switching in a more detailed way. In this post I’ll configure my previous topology to use VTP and let STP prevent frame looping and other “anomalies” on Layer 2. 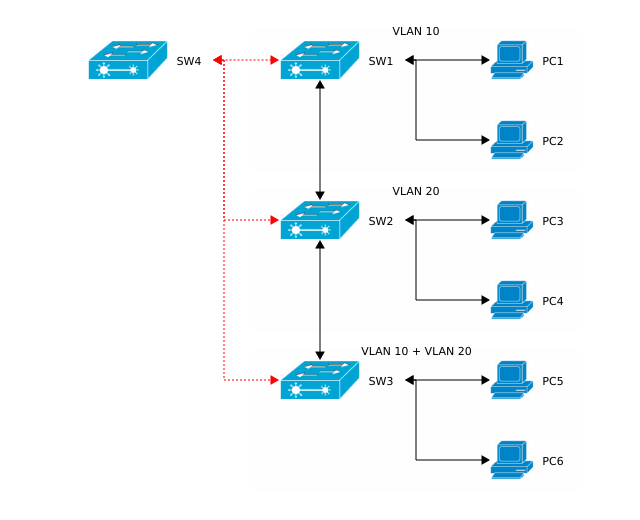 The new added component SW4 is connected to all other switches (red lines). Since a new switch has been added we’ll have to add the existing VLANs to the corresponding interfaces as well. But this time I won’t configure the ports manually. Instead I’ll use a Cisco proprietary protocol called VTP to exchange information about VLAN accross all available switches. So called VTP advertisements can be sent over ISL or 802.1Q (dot1q). Now let’s have a look at the process of adding VTP to the existing infrastructure.

The configuration of the remaining switches is pretty straight-forward. Let’s have a look at an example (in this case SW2):

In order to test the configuration I’ll add VLAN 40 (Testing) on SW1 and check if that gets advertised:

Right after we verify if the clients got the VTP advertisements:

If I again delete VLAN 40 from SW1 then the clients should delete it as well:

And now test it:

Since we now have to deal with interconnected switches and frame looping might be an issue, activating STP (Spanning Tree Protocol) will help mitigate the impacts of broadcast storms or multiple frame tranmissions. Cisco devices usually use Per VLAN Spanning Tree Protocol (PVST+, PVSTP) which is proprietary. The biggest difference to the “normal” STP (802.1D) is that PVST+ creates a different topology per VLAN. That means you can elect different roots (and thus different topology) for every available VLAN. Let’s have a look at the desired topology for VLAN 30 (Management):

In terms of STP SW4 will be the primary (p) and SW2 the secondary (s) root. Let’s configure Sw4 and Sw2:

And now let’s have a look at the port connectivity matrix:

And now let’s have a look at the STP information:

Now you may have noticed the diffrent port costs. A port cost is an integer assigned to each interface per VLAN for providing a good way for measuring a port’s connectivity.

So because most of the ports are FastEthernet ports they will get a port cost of 19 (when connected directly to the root).

As previosuly mentioned there are 2 port links between SW3 and SW4. EtherChannel provides a way to prevent convergence (STP) when a single port or cable failure occurs. The switches will treat the EtherChannel as a single interface. The big advantage is that if one of the links fails, STP convergence does not have to occur if at least one of the links is up. Besides that the switches will now have a load-balancing effect which will spread the traffic load accross the active links in the (Ether)channel.

So when using EtherChannels STP will operate on the EtherChannel itself rather than on the individual physical links. STP will then either forward or block traffic on the entire logical EtherChannel for a specific VLAN. Probably the most simple way to activate EtherChannel is to put the physical interfaces into the same channel-group. Let’s have a look how this is done:

If you don’t want to manually configure the EtherChannel, one can let the switches negotiate the configuration for it. Cisco switches support

So when using PAgP at least one side must use desirable or active when using LACP. Let’s have some look at one example (PAgP):

Now let’s see of the port channels are working well:

As you can see there is a port-channel Po1 consisting of Fa0/2 and Fa0/4. The port.channel is also working and in use.

Again Po2 is a working port-channel and consists of Fa0/4 and Fa0/5. You also should have noticed that the ports on each switch belong to different channel groups. You can now treat Po1 and Po2 as interfaces, bring them up or down. If your port-channel is down, do following:

You can also add VLANs to it:

Afterwards you should be able to verify that:

Although this is not a complex topology, adding STP to your switches, might increase the troubleshooting steps needed to localize your problem. In my particular case I was able to ping from PC3 to PC6, however PC1 wasn’t able to reach PC5. After eliminating a list of might-be problems like:

I was able to nail down the problem using STP related information. Furthermore it turned out that the EtherChannel was not working at all, causing certain frames to be dropped without reaching their final destination. So how might one guess how data would be routed based on output from the show commands?

There are several way how frames from PC1 would reach PC5. However when dealing with STP some ports will in be blocking state. Let’s check that out:

Based of the previous outputs our topology now looks like this:

In this case there is only one way PC1 could send frames to PC5 (red lines):

In the next posts I’ll deal with IP routing on Layer 3.